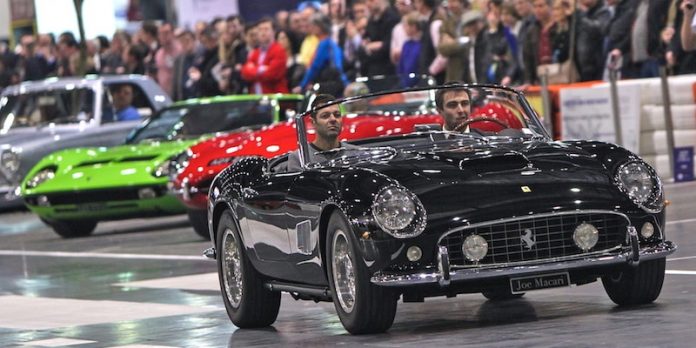 The UK is certainly home to many classic car events throughout each year, such as Goodwood’s Festival of Speed and Revival or Birmingham’s NEC Classic Car Show, but it was felt that the nation’s capital was missing out on all the action.

And so, last weekend played host to the inaugural London Classic Car Show, held in the halls of London’s ExCel centre, home to London Motor Shows of years gone by.

A classic event right from the start

Over four days, more than 25,000 car enthusiasts drooled over some of the finest machines ever to grace a road or racetrack, as well as a Grand Avenue running right through the centre of the whole show. Each day several featured cars would parade up and down the avenue, providing a unique difference to most car shows which are purely static. Most of the highly-valuable vehicles were treated fairly gently by their owners, but the sight and sound of a Lotus 102 Formula One car sliding around a roundabout and jetting up and down the avenue certainly got the crowd excited. Although the folks attending the neighbouring Boat Show were probably a bit bemused by the noise…

Iconic classic cars around every corner

Everywhere you looked there were displays of legendary cars from all the great manufacturers. Octane magazine sponsored an exhibit of great Le Mans cars from across the decades. Motor Sport magazine hosted a similar display of seminal F1 racers. A special exhibit celebrated the achievements and genius of Adrian Newey, the most sucessful designer in Formula One history. Another exhibit curated by James May of Top Gear fame presented a display of what he considered to be the ‘Thirteen Cars That Changed The World’.

Naturally, British classic cars were featured heavily on most stands, and the show probably had more E-Type Jaguars than you have ever seen in one spot, including a fabulous polished aluminium coupé from renowned E-Type specialists Eagle. There were rare and unique cars from the likes of Bentley, Aston Martin, Rolls-Royce and even Bristol, not to mention marques from all over the world. Ferraris naturally abounded all around the hall, Porsches of every flavour were on display and Maserati had a large stand to commemorate their centenary.

Just when I thought there couldn’t be any more dream cars to spot, I stumbled across a Ferrari 288 GTO which looked to have been simply abandoned in a corner on its own, almost as if the organisers had run out of room and didn’t quite know where to put it.

A classic event, with an encore already booked

By all accounts the inaugural London Classic Car Show was a huge success, which was thoroughly deserved as it was a fantastic event – especially as a first effort.   The organisers have already confirmed that the show will return next year, and promise that it will be at least 50% bigger than this year. So mark down 18-21 February 2016 in your diary right now and make sure you don’t miss out.